All eyes are on Otosan Uchi as a chaotic Imperial succession is hastily planned. While the Imperial City is the focal point for these dramatic events, strife is infesting Rokugan from all angles. The Emerald Empire is breaking down into chaos—who will you support? Justice for Satsume continues the themes of the Inheritance cycle, placing an emphasis on Courtiers and Bushi, introducing two new disguised characters to surprise your opponent, and offering up two Clan Champions!
Post Reply
2 posts • Page 1 of 1 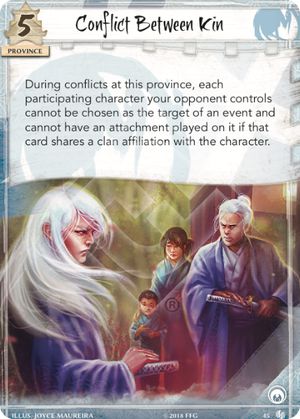 Re: Conflict Between Kin (Crane Province)

Conflict Between Kin is a good province, is it busted no, is it better against certain clans than others, yes. Should it be in your province row, no, if you are going to use it, it needs to be under your Stronghold. As a stronghold it is a conflict winner against some clans. Lion, Dragon, Phoenix, Unicorn, all have events and attachments it can shut down. Even in the mirror it has some use. It does little to nothing against Scorpion as all they are hitting your people with all their stuff, same with crab ( even though they play very little in clan stuff on attack ). It was largely written off by the crane community when previewed, and I think has very little testing done with it.
Top
Post Reply
2 posts • Page 1 of 1

Return to “Justice For Satsume”